EVERGREEN: THE ROAD TO LEGALIZATION is the definitive feature documentary film on the legalization of recreational marijuana in Washington State, examining the inside story of I-502 and the groundbreaking impact of this controversial decision on American drug policy.

Watch the EVERGREEN Movie Trailer and see reviews below:

“Marijuana’s Journey to Legitimacy. This assured documentary is loaded with rancor … the battle isn’t over whether pot should be legalized, but to what extent.” – The New York Times

“Evergreen skillfully captures the tension and drama in a normally tranquil community, as well as the historic vote to make weed legal in Washington.” – High Times

“3.5 out of 4 stars. An enlightening look at the road to pot legalization… A taut, thorough chronicle of the 2012 campaign to pass Initiative 502… ‘Evergreen’ is an energetic study of a hard-fought battle… a lively story about passion and political compromise.” – The Seattle Times

“A fascinating, extraordinarily well-researched and executed doc… How the law was constructed, why it succeeded in passing, what loopholes still exist that could potentially continue discriminatory law enforcement practices — it’s all laid out digestibly and compellingly by Morton and his team.” – Filmmaker Magazine

“Riley Morton’s resonant documentary examines two opposing fronts in the battle to decriminalize marijuana use… Morton and Cowan elucidate the situation from the ground up with considerable clarity, aided by the well-paced editing of Darren Lund and Jason Reid. Lensing by helmer Morton fully exploits the photogenic qualities of both the state and the weed.” – Variety

“‘Evergreen’ reveals the weird lessons of Washington’s weed battle… a fascinating case study in the promise and perils of ballot-box democracy, and the give-and-take nature of social progress.” – Salon

“The best doc ever made on the subject of marijuana legalization… Extremely informative, very well researched and clearly presented.” – The Video TapeWorm

“Journalistic objectivity enables the movie to illustrate a fascinating truism about human behavior: People on opposite sides of an issue often favor the all-or-nothing hardline over true compromise.” – CityArts

“You haven’t seen the marijuana legalization debate rage on like this before… Both sides are given equal time, truly giving the film a sense of urgency that this type of issue truly deserves… a thrilling, stakes-raising bit of storytelling from everyone involved here… A deeply vital piece of political discussion… a really thrilling look at where the real discussion behind this movement lies… we’ve rarely seen the issue of marijuana legalization discussed this viscerally. Really great bit of documentary filmmaking.” – Criterion Cast Review

“The movie felt as timely as a news broadcast… An important document for students of political history to see how a successful campaign is won, and how it’s lost… It’s a useful companion to DA Pennebaker and Chris Hegedus’ The War Room…” – Another Rainy Saturday

“A compelling, provocative and enlightening glimpse into the complex and sometimes contrary world of cannabis legalization in the United States. All of the controversy, infighting and emotion that is inherent in democracy is included in this fast moving example of what it takes to exact reform under the iron fist of pot prohibition. Any serious reformer, cannabis enthusiast or student of history will want to take the time to view this historic time capsule of a film.” – Vivian McPeak, Seattle Hempfest 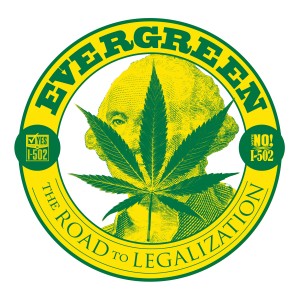